Tufnell Mere once again hosted CAA`s annual Junior Carp Match. Unfortunately, the water level was still quite high so only the pegs on the left hand bank were in operation. The wind was blowing towards the carpark end so hopes were high that the fish would follow the wind accordingly.

The draw took place with Fenton from DT Bait Developments picking the swim numbers. Each young competitor came up and received a kilo bag of DT bait of their choice and goodie bag from Nash Tackle containing a Spomb and various end tackle components, both of which were appreciated by all those taking part.

Draw over and they made their way to their respective swims to set up and plan their approach for the day.

With the weather set fair for the day and a warm gentle south easterly wind blowing left to right no one was quite sure how it would fish. General consensus said there would be a few fish caught but will be hard going.

The whistle went and within a very short time Bradley in peg 12 got off to a flyer with a lovely 20 lboz. common, one of the biggest fish ever caught in a junior match. That was it for a while until Ben in peg 8 landed an 11lb 8 oz followed by 10lb 2oz. Again,it slowed down with bites few and far between, Vinny in peg 2 by the carpark, landed a 12lb common

At roughly the half way stage there were only a few fish caught but Ben in peg 8 had 4, biggest at 15lb 14oz. With the sun out the fish were cruising on or near the top and most didn’t seem bothered about feeding

A few of the youngsters still had not caught and though there was plenty of time left young Ava in peg 10 was one of those probably thinking it may be a repeat of last year when she blanked, but with a bit of perseverance and some smooth casting her first fish graced her net, a lovely 16lb 6oz common. After that a 15lb 4oz was weighed in and the young lady was on a roll.

You had to feel sorry for Aimee who was stuck in the middle between Ava and Ben who were catching and she wasn`t. I`m sure most anglers can relate to that scenario at some point in time.

With the exception of Vinny in peg 2, the anglers in the carpark bay were struggling and whoever said the fish feed with the wind obviously hadn’t told the Tufnell`s fish. A walk around the lake showed a lot of fish holed up in the areas where we can`t get to, due to the water levels.

Another walk round and Ava had been busy with a few more fish and was taking a commanding lead from Ben who, though, was catching good fish it was not enough and with just a couple of fish from other swims it was Ava leading the way for the Ladies. 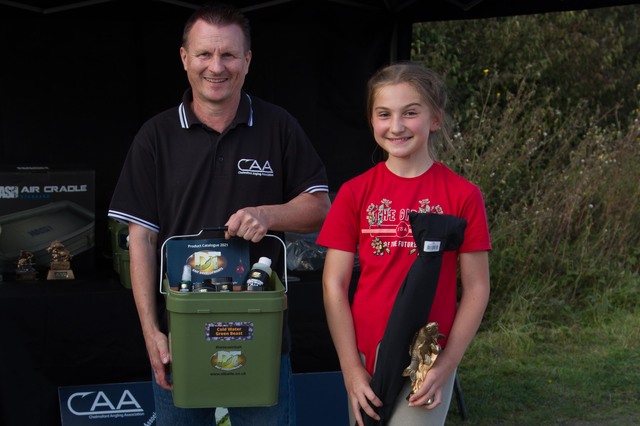 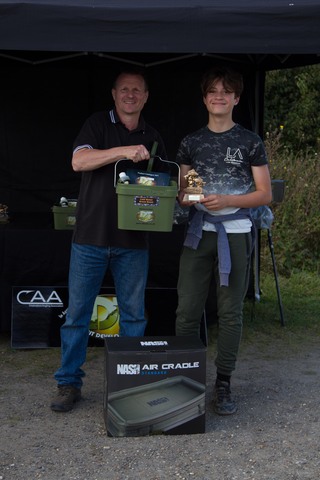 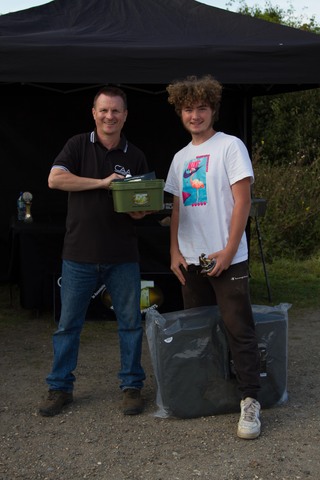 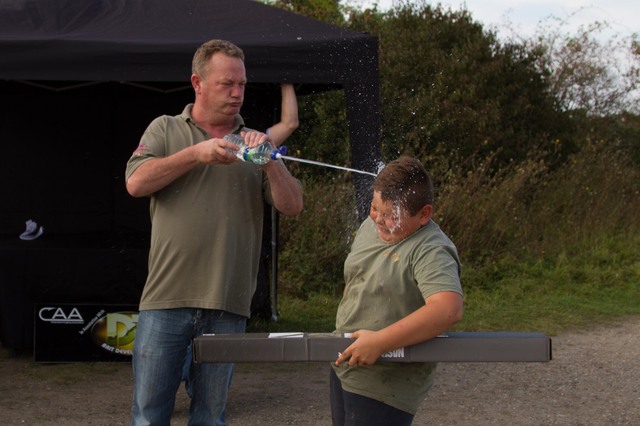 Bradley Townsend won a Nash Retainer/Weigh Sling for his biggest fish at 20 lboz.

(And, a soaking from Mr Thacker for giving him the run around)

An excellent performance by Ava who becomes the first young lady to win the Junior Carp Match, hopefully it will encourage more women and girls to take up angling.

Along with the 1,2,3 prizes, Adam Thacker awards a prize to the young angler who he felt worked hard, listened to advice and generally sums up what the day is all about. This year the award went to Guy Sinclair, well done young man.

Commiserations to those who didn’t catch anything today, all I can say is keep your chin up, keep practicing and maybe next year will be your year, everyone blanks from time to time so there`s nothing to be disheartened about.

Now the Thankyou` s. As ever without the support of the following bailiffs, who give up their time to help marshal the proceedings, weighing the fish and helping the juniors, Ed Mead, Ian Reynolds, Mick Moseley, Mark Reynolds, Nick Passfield, Stuart Allsopp, Martin Allen, George Fenner, Ian Sorrel and Phil Watts this event would not be able to take place.

To Adam Thacker who run the event in which everyone had a thoroughly enjoyable day.

Thank you to our sponsors today Nash Tackle and DT Bait Developments who supplied nearly £1000 of prizes between them, its very much appreciated by CAA and all the competitors who took part.

All it leaves me to say thank you to the juniors for taking part and their parents, grandparents and guardians for looking after them today and carrying all their gear back to the carpark.

I hope to see you again next year and maybe a few new faces as well.